A year in the making, Planet X2 is now finished and ready for sale. For those unfamiliar, it is a real-time strategy game developed for the Commodore 64.  It may very well be the only such game in existence on the platform.  It runs on any stock C64 and any compatible floppy drive.  It can be purchased here: The 8-Bit Guy Store 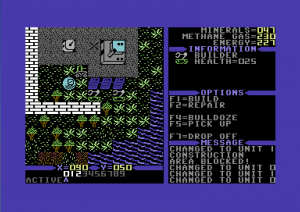 I recommend watching this review for detail on the gameplay: