There are a lot of 8 and 16-bit single-board hobbyist computers available these days.  But every one of them falls short in some way or another from what I dream of.  I’d just design one myself, but I’m not really good enough with electronics to do that.  So, I’m hoping somebody else will make my dream come true.  So I’ve compiled a list of things I think it should have.

Off the Shelf Components

So, basically I would not want the computer to use any old components that cannot be purchased anymore.  That includes custom chips from Atari or Commodore or whatever.  I would hope that the system would eventually get a larger user base and I wouldn’t want to see any shortage of parts arise preventing mass production.  However, I prefer to avoid any FPGA or microcontrollers if possible, but that’s not a deal-breaker.

I would want the CPU to be 6502 or compatible, such as 65816.  However, I’d be fine with the traditional 6502.  I would prefer a faster clock speed, such as 8 Mhz or better.  That way people could write code in BASIC and it would actually run fast enough to be useful.  As long as we aren’t stuck using something like Commodore’s VIC or VIC-2 chips, then this shouldn’t be a problem.

I would want 128K or 256 of static RAM, with possibly the ability to upgrade it.  If using 6502 then there will need to be some sort of banking, but with 65816 it should be able to access all of it directly.

The video chip would be the hardest thing, I believe.  Being that I want off-the-shelf components only, there aren’t a lot of video options.  I’d definitely want the computer to be able to output Composite or VGA.  HDMI would be okay as well, as long as it wasn’t the only option available.   Resolution isn’t all that important.  I’d want it to be similar to 8-bit machines of the era, possibly with different modes.  640×480 would be fine for a maximum resolution.  I don’t plan on doing any desktop publishing or photoshop on the machine. 320×200 would be good for games.  I could see this chip being an FPGA or microcontroller if need be.

I’m pretty flexible with this.  I’d be okay with using some off-the-shelf Yamaha FM chips.  But I’d also be okay with having a socket for a SID chip or one of the off-the-shelf replacements such as the SwinSID.  Ideally some sort of DAC would be nice, some of the Yamaha chips have that built in.

ideally, it would use an SD-Card.  However, to make things easier, I’d be okay with it using standard Commodore IEC connections and then I could use a SD-2-IEC adapter in order to get the SD-card.

Here’s where things get interesting.  I want it to be able to run Commodore BASIC.  I want the friendly screen editor and feel of a Commodore machine. However, it doesn’t have to be compatible with any specific Commodore machine.  In fact, I’d like to think of this machine as being the true successor to the C64.  Just like the C64 was not compatible with the VIC-20 or the PET or the Plus/4, total compatibility is not required.  It just needs the feel.  Also, it needs to use PETSCII characters.

If the machine is close enough to a Commodore machine, it should make it easy to code for using existing assembly tools and cross-compilers that are used with the C64.  Hopefully somebody would even write emulator support for it so that we could code and test on a PC.  I’d love to see this system become a de-facto standard for 8-bit hobby computers and see a community build around it where games and other software are developed for fun.

I want the machine to have some of the conveniences of the modern world, such as SD storage and modern keyboard and video standards.  But, at the same time.. I don’t want it to be “too powerful” because then you begin to lose the magic of an 8-bit system.   Somebody please build this for me! 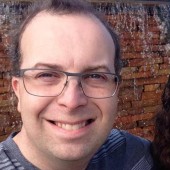 Take a listen to my two latest projects